Rock salt (sodium chloride or table salt) was first found in the Netherlands in 1886 when a well drilled for drinking water on the Twickel estate in Twente (province of Overijssel) unexpectedly encountered it. The initial concession for rock salt production – Buurse – was granted in 1918 in order to reduce Dutch dependency on rock salt imports from Germany. This marked the start of what has become a traditional Dutch rock salt mining area.

In the Buurse concession, rock salt deposits of Triassic age are encountered at shallow depths of 350 to 500m. The Triassic period lasted from approximately 251 to 200 million years ago. Seismic studies in the 1950s to 1980s showed several other salt deposits. Since 1954, rock salt has been produced near Heiligerlee and Zuidwending in the province of Groningen, while magnesium salt (magnesium chloride) has been produced from diapiric salt domes in Zechstein salt deposits near Veendam.

Since 1996, salt has also been produced from Zechstein salt at depths between 2500 and 3000m near Harlingen in the province of Friesland. These Zechstein salt deposits date from 271 to 251 million years ago. 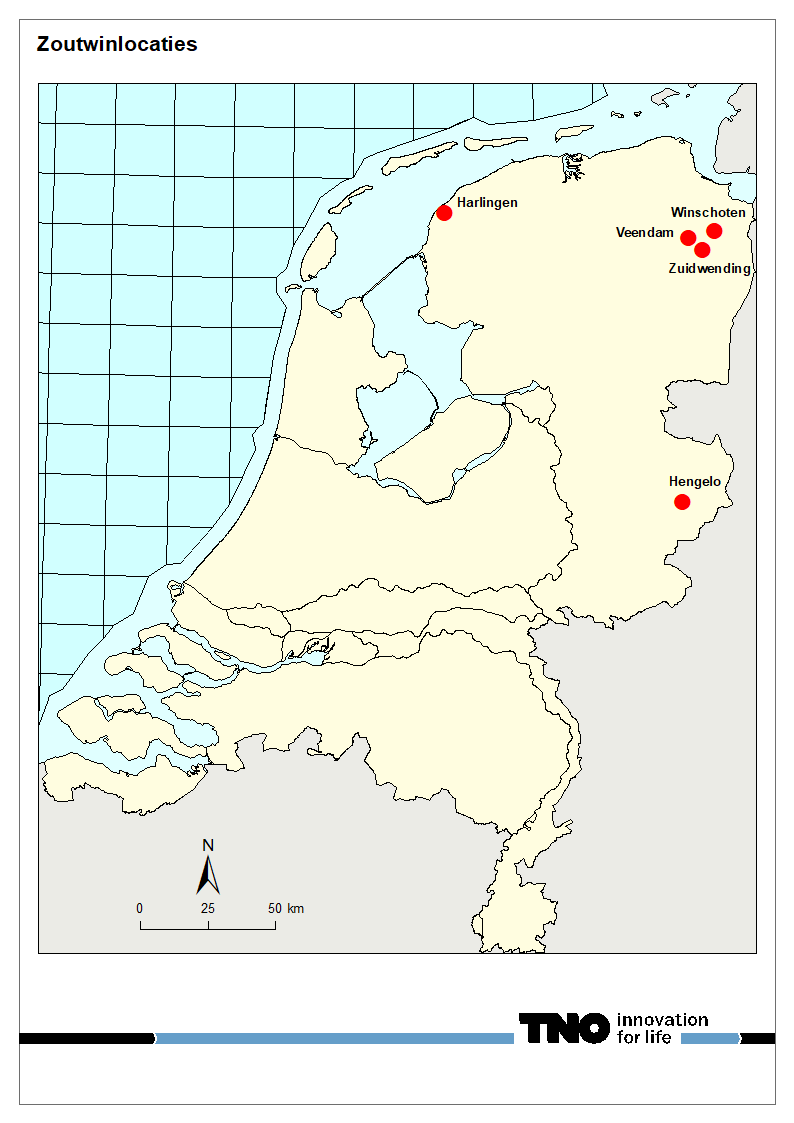 In the Netherlands, salt is produced by solution mining. This involves drilling one or several wells down to a salt layer. Hot water is pumped down the well, dissolving the salt in the salt layer, and the resulting saturated brine is transported to a production plant, where the crude brine is purified in a brine purification facility. The water is subsequently extracted in an evaporation unit, leaving salt behind.

The underground cavities created by salt mining (salt caverns) are filled with brine, leaving no empty spaces in the subsurface.

The salt produced is mostly used by the chemical industry and also in human and animal food. Other uses include softening of water and salting of icy roads in winter.

The dimensions of salt caverns can be controlled to allow them to be used later for storing other substances. Near Zuidwending, a number of caverns resulting from salt mining are currently being used for natural gas storage (Aardgasbuffer Zuidwending). If demand for gas peaks on, for instance, a very cold winter day, gas stored in the caverns can be supplied to the national gas transport network.

Since 2012 a cavern near Heiligerlee has been used for nitrogen storage (Stikstofbuffer Heiligerlee). Adding nitrogen to natural gas that differs in composition from Groningen gas can make it compatible for use in Dutch homes.

A number of caverns near Enschede is being used for storing diesel fuel. The Netherlands has to keep a Strategic Petroleum Reserve, sufficient for 90 days’ supply, in case there is an oil crisis. This diesel fuel storage facility opened in late 2015.

Basic data on all brine fields and production plans (public versions) are available for all developed fields.