In the Dutch subsurface more than 470 gas fields are discovered, about 250 fields are developed. The Groningen gas field is by far the largest . The other fields are therefore called 'small fields'.

Resource
The natural gas resource is defined as the volume of natural gas that can be produced from discovered gas accumulations in the subsurface of the Netherlands. Many of these accumulations have already been developed and are currently on production. As a result only part of the initially producible volume of gas remains. The remaining commercially producible volumes of natural gas in the proven accumulations are defined as the (remaining) reserves. Discovered volumes of gas which are currently not considered to be commercially recoverable due to one or more contingencies are called contingent resources.

As at 1 January 2016 there are 477 proven natural gas accumulations in the Netherlands.

The resource estimates for developed accumulations are based on the information supplied by the operators in their annual reports and submitted in accordance with the Mining Act. As a consequence of the adoption of the PRMS, the resources are from now on subdivided in Reserves and Contingent resources (subcategory Development pending) To a certain degree this corresponds with the formerly used subdivision in developed and undeveloped fields and as such does not result in a change in trend. The use of PRMS as resource classification results in a uniform way of reporting. Up until last year the remaining reserves at the time of conversion in gas buffers, Norg, Grijpskerk and Alkmaar  were reported separately. As of this annual report these are included in the regular reserves.


Production
This section of the annual review deals with the expected trend in the supply of Dutch natural gas (domestic production) in the next 25 years (2016 to 2040). Estimates are largely based on data submitted by operators. The reference date for the present review is 1 January 2016. All the volumes are given in billions of m3 Groningen gas equivalents.

This section deals with the expected trend in the supply of Dutch natural gas (domestic production) in the next 25 years (2016 to 2040). Estimates are largely based on data submitted by operators. The reference date for the present review is 1 January 2016. All the volumes are given in billions of m3 Groningen gas equivalents.

The prognosis of production from Dutch natural gas will again be restricted to the small fields this year. No long term predicition of production from the Groningen field can be established due to the continuing discission on gas extraction and associated induced seismicity above the Groningen field. The NAM has submitted an updated production plan for the Groningen field to the ministry of Economic Affairs for approval. On 24 June 2016 the minister sent a lettert to the Second chamber which stated that the cabinet decided to establish the level of production of gas from the Groningen field at 24 billion m3 per year in the draft assent. In order to establish security of supply, this decision allows for an increase in the maximum level should winters colder than average occur. As the decision is not definitive yet, the estimated supply for the next 25 years (2016 to 2040) is restricted to the small fields and as yet undiscovered accumulations (exploration potential). In addition to the estimated future production the figure below also provides the actual natural gas production in the Netherlands for the period 2006-2016. 92% of the prognosed production from the small fields for the year 2015 was actually realised.

The estimated domestic production from the small fields is based on the following: 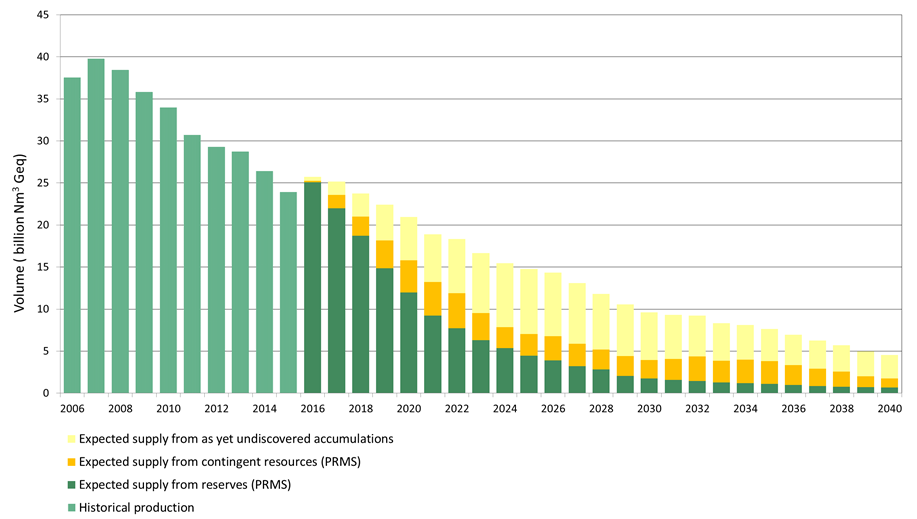 As at 1 January 2013 there are 48 proven natural oil accumulations in the Netherlands. At present, 12 of these accumulations are producing.

Production
The figure below (click to enlarge) shows oil production since 2006 and the prognosis for the next 25 years. This prognosis is based on the annual reports of the operators. Compared to last year’s forecast, the production has lagged behind expected production slightly. This is due to the halt in production in the Schoonebeek field as a result of problems in disposal of produced water. The expeced increase in production as of 2017 is mostly from the Q13-Amstel and Schoonebeek fields. Moreover several new offshore fields will come into production.