The Groningen field was discovered in 1959 and at that time turned out to be the largest natural gas field in the world. Production started in 1963 and NAM (Nederlandse Aardolie Maatschappij), the joint venture between Shell and Exxon Mobil which operates the field, estimate the initial recoverable reserves at 2900 billion cubic metres (Nm3). Since the start there is still approximately 470 billion Nm3 available as resource. As Groningen gas is relatively rich in nitrogen (14%), its calorific value is lower than that of most other gas fields in the Netherlands. Owing to the Groningen field’s huge volume, most domestic appliances (e.g. for heating and cooking) in the Netherlands, Germany, Belgium and Northern France have, since the 1960s, been adapted to use this low-calorific gas. 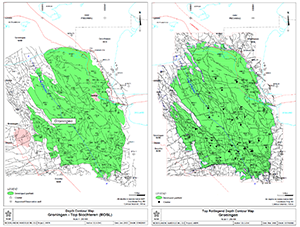 Figure 1   Structure map of Groningen gas field. The depth contours represent respectively the top of the Slochteren Formation (left) and the top of the Rotliegend (right)

In view of the increased induced seismicity, the volume of gas to be produced from the Groningen gas field has, since 2014, been determined by the Minister of Economic Affairs in a decree on the Groningen production plan. For the 2015-2016 gas year, the maximum production was set at 27 billion Nm3. Since then this is further decreased to 4.6 billion Nm3 (average temperature) for the gas year 2021-2022. The Dutch government also publishes News on the decision-making process on its website. More information on the production from the Groningen gas field can be found on Dashboard Groningen, Datacenter on NLOG and in the Annual report - Natural resources and geothermal energy in the Netherlands.

In view of the special situation of the Groningen gas field, the most important technical reports drawn up by TNO in relation with the induced earthquakes can be found under the tab public SHRA Groningen. The annual risk analysis carried out by TNO can also be found here.